“Box of Rain,” The Grateful Dead

The lyric above is the one that made me fall in love with the Grateful Dead; what a melancholy, powerful statement. Fifteen words summing up the human experience. Short time to be here, but a long time to be gone. How are we going to spend our time? It’s a big question, one I certainly did not have the answer to. But the idea that a song—alas, one line in a song– could challenge me in this way, that was rare, and something worthy of my time. So into the rabbit hole, I climbed.

If you look closely at the Dead’s library, you will quickly come to see that their music is sprinkled with existential questions like the one above. After all, with a name like the Grateful Dead, how could it not be?

There is a substantial line in Amir Bar-Lev’s new doc Long Strange Trip that goes something to the effect of, “…in order to live life, you must first accept death.” Watching Long Strange Trip, themes of finality feel overwhelmingly in the forefront. The cinematic piece seems to be almost a direct counter to Deadhead culture, unsubtly forcing the realities of life unto a presumably escapist audience. Like so much of the band’s music, this film holds a mirror to society and asks us to look, while simultaneously providing the avenue of escape for which we are so desperate.

More than once during the four-hour runtime, I found myself broken by the movie’s clearly pained inhabitants putting their issues on display for all to see, yet for some reason, unable to acknowledge the cry. A foreboding sense of doom runs through the film, at times as thick as that of a suicide letter stamped and ready for delivery, only to be repeatedly torn to shreds unopened. The familiarity emotions running through Long Strange Trip is an uneasy one, the sense spoken to. For me, it recalled the pain I have experienced in my life broadcast in front of a group of strangers.

When I was twelve years old, I was diagnosed with bipolar disorder. The inevitability of having medical jargon defining me, my values, and my worth as a human being was enough to make me withdraw. On top of that, I was dealing with chemical imbalances out of my depth, watching from the inside out as my own biology ostracized and isolated me from the ones I love. Rapidly, I witnessed the decay of self-normalcy, dumbfounded by the way “average people” treated a boy, who, through no fault of his own, was far from average. The formative years of my youth were spent watching films and listening to music that reflected my situation. At thirteen, I was thinking about the sounds of Simon and Garfunkel’s silence, and wondering if the darkness I felt was the same as theirs? Lars von Trier became a director I would later examine, his viewpoint on life striking particularly close to home. Artists provided solace, their work, a binding connection. Springsteen’s music was devoured, the lonesomeness of the western genre became quite appealing, and the music of the Grateful Dead rang in my ears on repeat. My childhood was one of escapism. Living became a sort of out-of-body experience, and the line between fantasy and reality became remarkably distressing. As a child, I had many questions, but few answers: Why were the people in these films, in these songs, kinder, more understanding individuals than the ones in real life? Why are we so cruel, and why am I so often the butt of such cruelty? Why? Things went on like this for a very long time.

Watching Long Strange Trip, I was reminded of these years, reminded of that pain. It stung. Seeing Jerry, Phil, Bob, and the rest of the boys come together out of desperation brought me back to that place. These were men on an expedition, men searching, searching for… what? I do not think even they knew. I have an acute awareness of that search. The blind mission when one stretches one’s hands out in the dark, grasping desperately for meaning, for connection, for some sort of common understanding, and welcoming. It is what we all seek. Connection is the very foundation of the human experience. These men found that in their music; a sanctuary of escape not just for themselves, but for a legion of loyal fans.

For four hours, Long Strange Trip is revisits this sanctuary and investigates this senee of being. Free from the grip of societal norms, free from the shackles that are hell-bent on keeping the different feeling different. In a strange way, The Dead provided validity to those who felt completely lost. With Long Strange Trip, the artists are rejuvenated, brought back, baptized by the spirit of music.

At first, while watching the film, I wanted to fight it. To run from its emotions and hightail it to a more normal film viewing experience. What I saw hiding in the backs of these men’s eyes was all too familiar. Seeing my reflection in their anguish, was a heavy weight on my shoulders. It was nearly too much for me to take. The loss and unfiltered search for love and understanding hit all too close to the vest. At times, I felt as though I was watching men I had never met reenact my life under different circumstances, and that lifting was too heavy

Somewhere along the four-hour journey, there was a shift and a strange comfort set in. I had a sort of warm blanket epiphany. It all made sense. Their cross was my cross, too. We all bear this burden together. Odd as that sounds, these were the emotions running through my mind while watching Long Strange Trip. I am not alone, I thought to myself. I am not alone. I am not alone

In that moment, I let out an audible sigh of relief. The film was telling me things were going to be okay. It was telling me to feel, to embrace, to live. Use your pain as fuel, because what else are you going to do with it? If we can do it, you can do it, too. Life is a voyage, man. If you roll down Highway 61 for long enough, someone like you is bound to show up. And when they do, you’ll get to talking. And the more you talk, the more you’ll listen. And in doing so, you will understand that you are as equipped for this life as anyone else. We are more alike than most of us realize. The faster we learn to embrace our differences, the happier we will all be.

The Dead have always been a paradoxical band. That is undoubtedly part of their charm. They create upbeat jams, underlined with the pending inevitability of the end. Sooner or later, it will come for us all. There is no getting around it, no hiding from the inescapable. We are all going to die. Our chapter will close, and we will be forgotten, leaving little behind. But maybe that is okay. That is okay because we were here. Because we did something. Because we experienced. As long as we embrace, we feel, we live, it’s okay. It is what we choose to do before the last grain falls that defines us. With that in mind, our journey becomes a bit less frightening, or at least mine does. With that in mind, it is easier to embark on this Long Strange Trip. 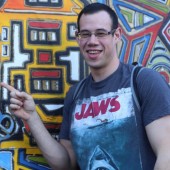 George McCann is a writer based in New York. His passion for cinema is only matched by his love of Phish.