Fans of the comic book/superhero genre are bound to be delighted with the spring/summer movie lineup for 2014.  With the likes of Captain America, Spider-man, and Wolverine all headlining the most anticipated movies of the next few months, all of the women out there also have some serious eye candy to look forward to.  Ladies, even if you aren’t digging the superhero genre, please heed my advice and make the trip to the theater just to see these men in tights, literally.  In celebration of this wondrous occasion, I thought it fitting to share with you my own personal guide to dating a superhero.  I have ranked 10 of the most popular and studly superheroes below, from least dating potential (just run, run far away) to most dating potential (marry him, NOW).

“Don’t mind me. I’ll just be over here brooding.”

It is with great displeasure that I place my favorite superhero at the bottom of this list.  The qualities that make him one of the most captivating and intriguing superheroes are unfortunately some of the same qualities that would make him a terrible boyfriend.  He’s a tortured soul.  When he dons the cowl, Batman carries the weight of the corruption of an entire city. When he’s not acting the part of the caped crusader, Bruce Wayne is a tragic man who can never quite move beyond his past. The billionaire who spends too much time brooding over what he’s lost never lets himself move forward into new happiness. He will undoubtedly leave you the moment he begins to feel some kind of peace.  He’s seen as a playboy for a reason: defense mechanism.  You might be drawn toward Batman because you think you can fix him, I know how those maternal instincts work.  Rachel Dawes couldn’t, so don’t even try. I know he’s a hunk ladies, but you need to run far away from this one.

“You won’t like me when I’m angry. Or when you won’t let me pick the Netflix movie.”

Although Mark Ruffalo’s most recent portrayal of the Hulk illustrates an alter ego that’s seemingly under control on the average day, he said it best in The Avengers: “I’m always angry.” This guy takes split personality disorder to the extreme.  He’s literally a mad scientist (see what I did there…).  Your time of the month doesn’t hold a candle to when Bruce Banner gets angry.  Yes, you have the pleasure of the company of the sweet, intelligent, seemingly harmless Banner most of the time, but the other guy is always lurking in the corner, waiting.  Just remember ladies, Hulk smash. You’ll never even get to the makeup sex.

“You used all the hot water!”

Wolverine is slightly above the bottom of this list because of one quality: his loyalty.  He would never cheat on you, and if he cared about you, he would protect you at all cost.  But let’s face it, the guy is kind of a jerk.  He has anger issues that rival those of the Hulk, the consequences of which can result in equally debilitating bodily injuries.  If the guy has a bad dream he could accidentally gut you in the middle of the night.  Wolverine is also extremely jaded. He’s been around and seen it all, and he couldn’t care less about your best friend’s baby shower or the fact that the vending machine gave you Sprite instead of Coke.  He would, however, be more than willing to beat someone’s ass for you whether you want him to or not.  Tread lightly with this beast. 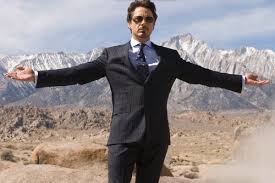 “I’m trying to invent a way to hug myself.”

Iron Man can easily lure you in with his charm, good looks, and witty quips, but don’t be deceived by those engaging qualities.  He’s the class clown, the prom king, and the quarterback all rolled into one. Tony Stark is always looking out for number 1, so in order to date him you have to be willing to always take a back seat.  Pepper Potts is the perfect woman for Iron Man, because her day literally revolves around him.  She gets paid to care only about him.  If you take a chance on this guy, be prepared to continuously feed his ego and laugh at his jokes on a regular basis.  I’m warning you, at least half of the time his jokes aren’t funny.  If you have any ambition to make a name for yourself based on your own accomplishments, you might want to avoid a relationship with Mr. Stark.

“Um, what makes you think that’s MY web on your good sheets?”

Here we arrive at the middle of the pack.  Spider-Man has the potential to be a decent college boyfriend, but I would rethink the relationship before extending it to long term status.  Peter Parker always has good intentions.  He’s smart, has a big heart, and was raised by an aunt and uncle of high moral influence.  However, it is quite possible he will live with said aunt for the remainder of his adult life.  The guy can’t take care of himself at all.  I mean, have you seen his bedroom?  He also can’t resist a run of the mill pickpocket criminal, which makes him a bit unreliable and flaky.  Expect many nights of waiting alone at the table when you have dinner reservations, if he even remembers to show up at all after he’s done flinging his webs all over the city.  Spidey is a stand up guy, but he has some growing up to do.

I know we all have different tastes in men, but I dare you to argue with the fact that Thor is the sexiest of all the superheroes.  His good looks are literally otherworldly.  Thor also has strong family values, which are evident in the fact that he continues to protect his brother even though he has tried to kill him and almost destroyed an entire planet of innocent people – twice.  He also has protective instincts over those he cares about, such as our insignificant human race.  However, his protective and competitive nature can result in an act now/think later mentality. He’s also pretty entitled, which you can blame that pesky godlike mentality for.  If you can handle Thor’s faults and are capable of dealing with a long distance relationship and the fact that he probably has better hair than you, this hammer wielding hunk might be the one for you.

“What? You want me to make you laugh?”

Superman is so perfect it’s inhuman, which makes sense given that he’s not exactly from around here.  Independent of the fact that he’s from another planet, Superman is your typical all-American good guy.  He was raised on a farm by good people and has the instinct to help everyone he sees in need.  Clark Kent is kind, smart, handsome, and hard working, so what’s not to like?  The only reason he isn’t higher on the list is because he literally has no faults.  Superman is so good natured and constantly concerned about others that it makes him just plain boring.  Have you ever seen him crack a joke?  He’s so serious and perfect that I would feel like he would constantly be judging me if I ate that extra donut or ducked out 15 minutes early from work.  Superman, if you’re readng this, let loose a little bit and we might move you up a notch.

“Hey girl. Sit down and tell me about your day.”

Sometimes the quality of a superhero doesn’t quite match the quality of the movie.  Although the film itself is not especially memorable, Daredevil has major boyfriend potential.  He doesn’t let his childhood trauma define him, but instead uses it as an advantage.  With his only “power” being the heightened senses he gains when he loses is sight, Daredevil uses good old fashioned hard work and dedication to reach his full ass kicking potential, which means he knows how to commit.  Matt Murdock also spends his days fighting crime, so you know he’s dedicated to what he believes in.  He lost his sight in the process of trying to help someone else, so he’s compassionate.  As a result of this he has to rely on his other senses to guide him, specifically his hearing, so it’s a safe bet that he’s a good listener and would be sensitive to you and your needs.  Let Mr. Murdock take you out for a midnight stroll, and you’ll thank me for it.

First of all, don’t get the wrong impression here, I’m not telling you to date a married man.  Mr. Incredible is unavailable, so technically he’s the epitome of undateable.  However, the fact that he’s a family man and a superhero means that he is the definition of the marrying kind, and ultimately has a dateable personality. The only reason he isn’t number 1 on my list is because he kept his “super” shenanigans a secret from his family until he got himself in too deep.  Altough he’s had his slip ups, Mr. Incredible has made many sacrifices in an attempt to have a normal life.  Also, when the going gets tough he puts his family’s safety first.  Every woman is a sucker for a superhero who would give it all up, hang up the cape, hold a boring job, and raise a family like the rest of us.  If only we had beat Elastigirl to the punch.

Well ladies, we made it to the top spot.  Is anyone here really surprised about my number 1 pick?  Behold: Steve Rogers, Captain America.  Just take a moment and let it all soak in.  Where do we even begin?  One of the most important qualities the Captain has is that he knows what it’s like to be less than perfect.  Before he volunteered to be experimented on, he was bullied.  You would never have to worry about him forgetting how far he’s come, and he has empathy for those less fortunate.  He also made the ultimate sacrifice by volunteering to serve his country at any cost.  Steve Rogers came from a time period where things were a bit more traditional and chivalry wasn’t quite dead yet, so  I’m certain he would treat any lady like a queen.  Even though we’re all feminists, deep down every single one of us would love to have a car door opened every now and then.  He’s honorable, he’s humble, and he’s hot.  The Captain is even man crush worthy, just ask Agent Coulson.

Beth is a lover of binge-watching, superheroes, and all things sci fi. She currently resides in the greater Pittsburgh area.

10 Actors Who Should Play Lisbeth Salander

Ranking the Films of David Fincher