Blade Runner 2049 and The Fight To Love Your Own Identity

Identity, the underlying thematic and narrative focus of Blade Runner 2049, is the most fundamental aspect of what makes us human. Despite the fact that the theme of “what it means to be human” is a storytelling cliche on a par with a cartoon mouse eating cheese, Denis Villeneuve’s Blade Runner 2049 explores a modernized form of identity unique in its profundity.

As a transgender woman who struggled to reconcile my gender identity for an excruciatingly long two decades, Blade Runner 2049, with its storyline about replicant Agent K’s turbulent struggle with his society’s expectation of replicant subservience while establishing  his own fledgling sense of humanity and independence, resonated with me perhaps deeper than it might have with many.

K (Ryan Gosling) begins the film as a blade runner who hunts down rogue replicants. Earlier in his existence, K was programmed to believe that humans are superior to replicants. From this, he internalizes that the entire purpose of replicant existence is to act as slaves to human overlords, and believes this to the extent that he murders any replicant that rebels against this social hierarchy.

Oddly enough, K’s compliance with this social order is akin to my experience as a child growing up in an anti-LGBTQ culture. I, too, was indoctrinated into a society that discriminated against people like me, and in 1990s America, prejudice against transgender people existed in every facet of life; The church preached that being LGBTQ was a sin, my family wanted me to stop being sensitive and “act more like a man,” the education system avoided discussing queer issues, the government actively legislates against trans people using public accommodations, and Hollywood portrayed (and still portrays) people like me as serial killers to be feared (Silence of the Lambs) and freaks to be mocked and disgusted by (Ace Ventura: Pet Detective).

Society’s message was loud and clear: I was worth less than dog shit.

So naturally when K begins Blade Runner 2049 as an obedient worker who commits acts of violence and publicly enforces discrimination against his fellow replicants, I understood his need to abide by the norms of his society. I repressed my feelings over my gender identity and avoided them to the point that whenever I cross-dressed, I justified the action as something I could stop doing at any time I wanted to, and I mentally buried my queer feelings so deep that I didn’t learn what the term “transgender” meant until I was an adult. Worse yet, my internal self-loathing caused me to be more outwardly homophobic and transphobic. While I wouldn’t be directly confrontational with anyone, I embodied social conservative ideology by being a bigot who actively feared queer people.

K’s self-hatred over being a replicant rivaled how much I detested myself for being a trans person. Save for his A.I. girlfriend Joi, K is reclusive and actively ambivalent towards his fellow replicants and accepts that the general human populace harbors the belief that K’s worth as a living being is equivalent to the contents of an Applebee’s dumpster.

However, K’s whole worldview is shattered when he learns that it is possible for replicants to bear children. This is a revelation that causes K to question his whole existence and personal philosophy. The possibility that replicants can procreate is an absolute game-changer that bridges an existential gap between man and machine, and the rest of Blade Runner 2049 is about K’s struggle over his identity as he tries to reconcile his physical machine like body with his inner humanity.

Watching K’s identity crisis on screen caused me to reflect on my own identity crisis during my college years when I finally allowed myself to mentally process the fact that I was born transgender, and I grappled with difficult introspective questions such as:

Who was I?
Was my life a lie?
Am I a freak?
Am I a terrible person?
What did I do to deserve this?
How could I not have known?
What the hell do I do now?

This was a tumultuous period of my life, and picking up the pieces after my mind had been so thoroughly blown by this shocking discovery was by far and away the most difficult endeavor I’ve tackled in my entire life. But this was battle was ultimately worth enduring the hardship and turmoil I faced in order to get to where I am today.

In the ashes of my own conflicted past, I discovered the woman that I always knew myself to be and the woman I desired to become. For the first time in my life, I saw myself as someone of worth and value that deserved happiness that any cisgender woman had, and this was ultimately liberating—and terrifying.

The acceptance stage of the identity discovery process isn’t universally smooth, a fact K can attest to as he often struggles with the idea of authenticity. For a good chunk of the film, K even believes that he is a child born from a replicant relationship, a fact that he eventually reveals as something he liked about himself. Being born rather than made in a factory made his inner-humanity seem more real and valid.

In other words, he wants to be seen as an authentic human being.

Joi also longingly desires to be seen as authentic. Early in the movie, she is upgraded so that she can physically feel her surroundings despite the fact that she is still a hologram. She longs for a human body of her own even though that is scientifically impossible.

My experience with authenticity is similar to both K’s and Joi’s experiences. I, too, desire to be seen as the person I truly am, and while my body will never be the exact same as a cisgender woman’s, I can alter my body through injectable estrogen and legally change my identity in order to be seen as my authentic self.

By the end of Blade Runner 2049, K sadly learns that he is a replicant made and not born, but he miraculously manages to embrace his inner humanity despite this. K is willing to rebel against the oppressive system that enslaved him even if it costs him his life because, if he were to die, he’d still have achieved a major moral victory—he attained inner humanity.

Despite all the hardship I’ve had to endure and the potential violence I must face because of my gender identity, I have achieved so much in a relatively short amount of time. Even if some transphobe were to kill me someday, I would die happy because I know what it’s like to be a free and authentic person.

I’ll know what it’s like to live as a woman, and that is something that no one can ever take away from me. 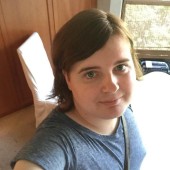 In Prometheus Space, No One Cares If You Scream