Mann In The Digital Age

Miami Vice bursts onto the screen without providing the viewer a hint of preparation. After the steel-blue Universal logo, Michael Mann’s adaptation of the ’80s cop drama shimmers into view, tossing aside the option of a title card in favor of an immediate rush of image and sound. Diving right into the tight spatial environment of a Miami nightclub, the first scene in an initial 30-minute stretch, Mann spreads his aesthetic intentions out on the table in a film immediately devoted to early Digital photography and, while most likely an unconscious choice, being a forerunner of technological experimentation in Hollywood. The scene’s lack of narrative information parallels the suddenness of its visceral staging as well as the blurred, docu-fiction approach of its evocation. A prostitution bust is already in motion, and Mann, well-versed in the crime genre and the products of audience expectation, throws exposition into the Miami skyline. Viewers are forced to reconcile with unanswered questions and a lack of embryonic context, not knowing who or what they’re supposed to follow.

What the viewer receives in reaction is hyper-real sensation, a formal stance so indebted to its visual distinction that A.O. Scott of The New York Times coined the film as, “An action picture for people who dig experimental films, and vice versa.” The opening sequence isn’t seen through clear layouts or defined space, but within the lens of abstraction via clustered, intertwining bodies moving to pulsating lights and music. Sonny Crockett and Ricardo Tubbs—played by Colin Farrell and Jamie Foxx, respectively—take on the detective roles as if the viewer is peering in on classified documents, never performing in diluted tones for the sake of comprehensibility. Conversation is practically non-existent in the opening ten minutes, and when dialogue arrives, it comes as largely indecipherable detective shorthand, alien to the audience. Mann obfuscates conventional elements and soaks it all in the unabashed cool of Miami Crime, establishing an aura which refuses to stoop to a lower level than its current plane. As Digital work, it’s a necessary decision, for Mann knew not to replicate processes and aesthetic traits from his filmic experiences. A new medium calls for a new approach, and in the case of Miami Vice, traditional elements of narrative and formal construction are upended.

Its visual/aural exploration is of the most interest, as it’s a rejuvenation of material. Mann has called Miami Vice “a very torrid kind of story” and the images and sounds reflect the sweaty glistened humidity in which Crockett and Tubbs navigate. Shot on a combination of cameras (Thomson Viper FilmStream, Sony HDW-F950, and Sony HDW-F900), Miami Vice observes perspiration dripping off bodies during normal and sensual activity and a sea that somehow provides a warm breeze for both the characters and the audience. Each texture is conscious of oozing ambiance, and they collide to collectively fulfill the grand gestures of the narrative. Digital is emblematic in regards to such detail, particularly in low light, and it’s particularly effective in evoking an impressionistic story with similar brushstrokes.

A key moment of Miami Vice, and one which stands out as a highlight image of Michael Mann’s filmography, is found in the scene following its nightclub opener, as Crockett receives a call from an informant whose cover is collapsing to murderous ends. With the sound subtly shifting from a source of thunderous music to the endless cacophony of a modern jungle, he stumbles out from the blaring soundscape of the club to the rooftop overlooking a hot summer Miami night to answer the phone. A purple and pink sky engulfs the number of bodies which increase over the course of the scene, the clarity formed out of heavy Digital artifacts on a stage evoked by a medium other than 35mm photography.

Such nighttime coherence and illumination allows for a grasp on the environments of undercover life which differs from similar cinematic treatments, in some measures, even some of Mann’s own. Unlike his Heat, a work from just over a decade earlier with epic roots in melodrama and “cops and robbers” narratives, the material of Miami Vice lends itself to Digital immediacy. As Calum Marsh of Reverse Shot states, “what we’re seeing lacks the artifice or mediation of analog film.” Michael Mann’s foray into Digital moviemaking is primarily an attempt to visualize the slightly-out-of-reach essence which frequently enclose and confine his characters in non-visual fashion. Dion Beebe – cinematographer of Mann’s Collateral and Miami Vice – states in an interview that “Michael wanted this sort of wraparound, non-directional lighting…” as if there’s “no real source, to make it appear that everything was lit from the street by the street’s own ambience.” Michael Mann, through the prospects and aspirations of Digital photography, found another trail to explore his art.

And at the time, the path was essentially uncharted, only boasted and sold by tech fetishists such as Robert Rodriguez, who shot Once Upon a Time in Mexico on a Sony HDW-F900, and George Lucas – loudly exclaiming his production of Attack of the Clones as a Digital work. The format would eventually, in a whisper of industry economics, overtake the standard, but within the early-to-mid 2000s, it was a curiosity, a hypothesis at best. Michael Mann, a practical artist obsessed with the authenticity of his stories, was one of the first – along with Rodriguez and Lucas – to utilize the realm of Digital towards more aspirational, creative ends.

In the case of Collateral, a Tom Cruise/Jamie Foxx crime thriller, Dion Beebe observed that “it’s a different result. Because you’re seeing a night world that is richly illuminated, with an enormous amount of depth, it’s slightly unsettling.” This switch in feel is a testament to the intentions of Mann and how newer technology can realize such designs. His Digital works – from select parts of Ali

to his latest Blackhat – provide a divide in approach and conception, and it makes the filmgoer question how an auteur with consistent obsessions, goals, thematic weavings etc. can tackle changes in technological advancement to suit their artistic drive.

Miami Vice is a successful example of a film’s pioneering a new high-tech route piloted by a auteur’s established ambition in that it evokes similar motifs and ideas already stamped into the filmography of Michael Mann. A crime drama, first and foremost (and most obviously), his 2006 film also grapples with professionalism and romance, how it’s inconsolable as a dynamic, and how these relationships affect the quality of the jobs in which these individuals involve themselves. It’s a swooning drama about occupations and a workplace treatise on intrusive feelings, much like Heat, The Insider, Manhunter, and Thief previously were (all earlier works from the Chicago artist), but the tenor is different, morphed by Digital form. Controlled by splashes of impression and urgent close-ups, Miami Vice utilizes its images, as stated by Calum Marsh of Reverse Shot, with “the authenticity of photojournalism,” capturing shootouts “in the blunt, confidential style of war reportage.” and allowing impact to overtake its minimal story as director of the emotional beats.

Even the spaces of Miami Vice become less about their presence and more about how they’re evoked. Familiar images of  masculine figures flying down a highway in a fast car, lost in their thoughts, aren’t necessarily there to provide excess cool, but to showcase the distinction between a similar scene shot on film and the texture within an HD image. Mann steals a lot of moments from his own films only to provide a reoriented perspective and visual. Heat and Miami Vice both showcase a lingering shot in which the main character looks out of a clear glass balcony to an endless ocean, and while the composition is steady in the former film, a practically identical moment in Miami Vice becomes anxious and sensitive due to the close-proximity of the camera to the actor, the weightlessness of the Digital tech, and the smeared coloring.

Equally concerned about evocation through its medium are the classic Michael Mann gunfights, placed as artifacts of iconography ever since Robert De Niro and Val Kilmer battled Al Pacino in the middle of downtown L.A. in Heat. While this early example is an undoubted masterclass in showcasing both sides in a confrontation of violence, its structure is inevitably tied to the constraints of celluloid; a camera roaming but never jostling off the shoulder of its operator in fear of the cameraperson dropping the magazine. Its central focus is character and how the intertwined narrative threads culminate in operatic showdowns. Miami Vice abandons clear-eyed intent on the individuals populating the space and instead revels in the ferocity of depicting a gunfight on a sea-shore during a thunder-storm. Blood splatters against the lens, and the muzzles of the assault rifles flash white; mixing pink, swirling clouds with exclamation marks of color. It is an exploration not just of domain but of the intricacies of the surroundings and how it is manipulated by artificial forces; weapons and people, industrialization and petty romance.

This contrast, of Mann staples shape-shifting due to the medium in which they’re conceived, burrows deep into the heart of the Digital/Film division, and why such a comparison is unnecessary.

Not long ago, the Digital path was essentially uncharted, only boasted and sold by tech fetishists such as Robert Rodriguez, who shot Once Upon a Time in Mexico on a Sony HDW-F900, and George Lucas – loudly exclaiming his production of Attack of the Clones as a Digital work. The format would eventually, in a whisper of industry economics, overtake the standard, but within the early-to-mid 2000s, it was a curiosity, a hypothesis at best. Michael Mann, a practical artist obsessed with the authenticity of his stories, was one of the first to utilize the realm of Digital towards more aspirational, creative ends. Michael Mann, like Lucas or Rodriguez, maneuver Digital towards a final product of its own rules and terms, shackled free from the constraints of filmic tools. Many filmmakers have now gone on to use Digital as a cheaper alternative to Film, but Mann visualizes how the availability of new methods can shine equally new illuminations on artistic expression, and that creative consistency can stabilize even with a radical shift into the excitement of new technology. 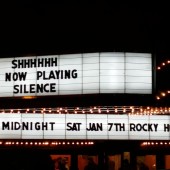 Writer, Inherent Vice Fan-club member, and forever in the 'Tobey Maguire' Spider-man phase. Angry at the world but still happy to be here.

In Praise of the TV Movie Marathon