The Uncanny Terror of Carnival of Souls

A young woman travels a bleak, lonely road at dusk. We don’t know much about her, but we know all we need: she’s fleeing a past suddenly defined by trauma. She lives in a world she no longer understands. She’s crossing the country to start again. As she drives, she peers around, as though monitoring her surroundings for the next calamity. When she turns back to the windshield, there’s a ghoulish man in the middle of a pitch-black highway (wait a minute, wasn’t it dusk a moment ago?) and as we zoom towards him—or he zooms towards us; it’s hard to be sure in the shock of the moment—an unearthly expression somewhere between a smirk and a grimace tugs at his mouth. It’s impossible to know what that expression means. We’ve never seen anything like this.

There’s a term in visual art, American primitive, referring to artists with little formal training, but innate aesthetic sense that enables them to create masterpieces despite, or even because of, their rudimentary skills. American primitive art is uncanny, somehow both amateurish and exceptional. It’s a tough trick to pull of in feature film, where outsider art tends to looks like Manos: The Hands of Fate or The Room, any appeal being an accidental byproduct of incompetence. But Herk Harvey, who directed Carnival of Souls in 1962 on a shoestring budget with a skeleton crew, managed to combine years of training in experimental theater with years of experience making industrial education filmstrips into a unique brew that became one of the few examples of visionary American primitive filmmaking.

Making movies is hard. Beyond just learning your apertures and the difference between hard and soft light, there’s a host of rules about where to put a camera, how to cut between shots, rules that are ingrained in viewers but mind-bending to learn. Unfamiliarity with this “film grammar” is what so often makes amateur films painful to watch. Carnival of Souls, first released 55 years ago today, is filled with this type of inadvertent rule-breaking—from unmotivated editing to awkward camera placement to the way actors look at things beyond the camera’s eye, this film feels unaccountably wrong, like a piano that’s just slightly out of tune—but rather than detracting from the film’s effect, the amateurishness essentially is the effect. That sense of puzzling off-ness is ideally suited to a story this eerie, creating a perfect feeling that the footing of this world is slightly askew. And the only explanation is that Herk Harvey must have had something few amateur filmmakers are blessed with: authentic artistic insight.

He painted his own face white, smeared black rings around his eyes, and created an indelible movie monster by shuffling around in a suit and messy hair. Combining spare resources and an eye for imagery, Harvey birthed something that looks sort of like a hungover businessman, sort of like an animate corpse, and a whole lot like nothing we’ve seen before or since. Then, he paired this startlingly unique image with a story that preys on primal fears. Mary, the film’s heroine, is beyond helpless as her world spins out from under her. She’s stalked by a force she can’t understand—the man, who appears out of nowhere seemingly at random, doesn’t overtly threaten her, nor does he haunt her for any discernible reason, leaving her no way to atone for whatever earned her this curse—and as the film creeps along with the unmoored quality of a nightmare, she begins to experience bouts of deafness, and apparent invisibility, robbing her of any power over her own life. And as we watch her torment, we can’t help feeling an unscratchable psychic itch, imagining our sense of isolation becoming horrifically literal.

It’s an easy film to follow, but that somehow makes it so much eerier to watch. Mary’s journey really has no plot in the conventional sense (the idea to remake it thirty-five years later was folly—there’s nothing to remake). The characters are barely defined, there’s no sense of a story arc or stakes beyond the unearthly ordeal that becomes her reality, and the accompanying fraying of her sanity. That lean, mean nature of the story makes it timeless, more like a campfire story than anything we remember seeing at the movies. And in the absence of plot, it’s the images that linger in the mind—besuited ghouls waltzing in an empty pavilion; that man, horrifying for reasons we can hardly identify, rising from shallow water; an abandoned amusement park at the edge of a lake that seem to belong on another planet altogether.

Finally, Mary finds some shred of hope when a doctor tries to break this curse she seems to have fallen under. “Have you never imagined you saw someone you know,” he asks her, trying to guide her towards some interpretive key,  “and walked up to them and found they were a perfect stranger?”

At every turn, we approach Carnival of Souls imagining it’s something we’ve seen before—from a distance, it does seem so much like an extended Twilight Zone episode—but as we look closer, it slips away and becomes something alien. Why do the characters’ eyes seem just a bit unfocused? Why do scenes keep ending and beginning with all the grace of a brick thrown through a window? And are those happily undead creatures moving too quickly? Is the film sped up? Am I imagining things? Am I imagining all of this?

“I don’t want to be left alone!” Mary shrieks when even the doctor’s help proves useless. But she is alone, and so are we, waltzing with this eerie thing that will follow us forever, appearing late at night when we think we’re safe, maybe grimacing, maybe smirking. 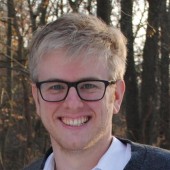 Ethan Warren is a filmmaker and playwright. His debut feature film, West of Her, is coming soon from Gravitas Ventures, and his first full-length play, Why Are You Nowhere? received the playwright's award for Staged Reading at the Midtown International Theatre Festival in Manhattan before a debut production at Southeastern Louisiana University, while his short works have been performed at theaters and festivals across the country. He currently lives in the Boston area with his wife, Caitlin, and their daughter, Nora.

Shane Black Is the Perfect Age for this Sh*t

The Counselor: The Birth of Ridley Scott’s Newfound Ferocity