Film culture tends to unfairly neglect the short film. There’s something amazing that can happen to a story when it’s stripped down to the bare necessities. Done well, the short film can captivate, amuse, and inspire in only a short amount of time. The six short productions from this year’s Three Rivers Film Festival attempt to do just that.

Accepted is a documentary concerned with the life of Alexis Taylor Monroe, a genderqueer youth in search of kinship and communion in his new town. Alexis is twenty years old and has recently relocated from New York City to attend Chapman University in Orange County, California. His world is one of assumptions and, while he tends to take each obstacle in stride, you get the sense that there are deeper struggles embedded throughout his unique experience. I have always appreciated a documentary wherein the creator’s keep their distance; however, directors Ariana Victor, Olivia Lauletta, and Greg MacArthur only delve into the vague concept of Alexis’ strife, keeping him at a distance as well. It leaves the film unfocused. We join Alexis as he rushes a fraternity, a daunting thought given his identity as genderqueer, but we are left in the car, only able to guess at what actually happens. We join Alexis as he visits his hometown of Wexford Pennsylvania where we are told about bad memories and of nasty things he was called, but we aren’t told anything specific beyond that. For a film so absorbed by identity, I wish I got to know more about Alexis’. In the end, a runtime of near eighteen minutes simply isn’t enough to delve into the complexities of one’s personhood.

The Exceptionally Extraordinary Emporium is a celebratory ode to the odd, focused around the craft shop: Jefferson Variety. As the people of New Orleans prepare themselves for the upcoming carnival season, you will discover a diverse group of characters that flock to the fabric store in pursuit of the perfect costuming supplies. It is a family-owned business with a lot of personality, a large variety of materials, and it acts as a home to the weird — the stars of Mardi Gras. People will come in from all walks of life to assemble intricate and extravagant costumes, but it’s more than that. Costume making takes on something spiritual, restorative. Director Lindsey Phillips takes the contained setting of a craft supply store and turns it outward, reflecting a community who finds beauty in the most banal of things. It’s a documentary with a lot of personality. A jovial score canvasses the array of customers that flood in and out of Jefferson Variety: Mardi Gras Indians, entertainers, regulars, newcomers, and so forth. Stitched throughout the framework of this community is a testament to rebirth, of finding something broken and making it useful again. While some might see a bunch of silly costumes, The Exceptionally Extraordinary Emporium is a reminder that it’s important to create in the midst of chaos.

I have a morbid appetite when it comes to comedy; so, I found myself especially enamored by Benjamin T. Wilson and Peter J.S. Regan’s A Funny Man. It tells the story of a middle-aged man who has been far too long in grieving and the well-intentioned young woman who, coincidentally, calls to sell him life insurance as he sits in his garage and his car fills up with carbon monoxide. It’s a film about feeling out of place, about being in stasis. The performers, Richard Cavallucci and Jess Paul breathe life into these two characters and ground the narrative when it needs it. It’s an exceptionally well-paced film, casually shifting between solemnity and humor. The comedy often coming from editing choices. It is never too quick to reveal its secrets, something many short films struggle with. A patient execution allows the movie to breathe and turn ambiguity into depth. In fact, it’s Regan’s greatest strength. I only wish the film relied a bit more on its ambiguity, as the drama does become overzealous and strips the world of much needed realism. While it does momentarily dip into self-parody, A Funny Man is held together by its charismatic performances and morbid sensibility.

Hunter is a horror short about a man who goes to his cabin in the woods for some time to himself and maybe some hunting. He soon discovers that something strange appears to be stalking him, ruining his quiet little vacation. It’s a classic scenario where the hunter becomes the hunted. There’s something to be said for how patiently Mark Stitzer allows everything to unfold; unfortunately, Hunter doesn’t provide much more past that. The problem is that we are dropped directly into the life of a non-person. He has no discernible personality, goals, or life outside of the narrative. It’s a common trap. Concentrating on spectacle rather than character requires a subtle visual intimacy that is lacking here. When the purpose of a film is to scare, the audience requires access to the character’s inner life. Horror is nothing if there aren’t any stakes.

The Last Transmission oozes with longing and dread. Based on true events, it tells the story of a retiring air traffic controller, Frank, and his conversation with a young pilot who calls in with sightings of the extraterrestrial variety over Roswell, New Mexico. What a beautiful short this is. The opening, set to Brenda Lee’s “How Deep is the Ocean,” is absolutely mesmerizing — following the early morning rituals of both Frank and the nameless pilot. When the opening scene ends, the cinematography drifts from melancholic to unease within moments. Directed by Stephen Turselli, The Last Transmission bathes in its atmosphere. Turselli seems to really believe in letting each shot speak for its own merits, lingering moments longer than you might expect. The film is carried by the camera’s voyeuristic tendency to outstay its welcome. It’s a gorgeous piece; however, it is interrupted by an aimless narrative that meanders about, filling time until the captivating conclusion. So, when the story comes down to Frank’s time at work, it lacks any kind of draw. It feels realistic, but fails to enthrall as much as the rest of the movie does. Still, it has one hell of an intriguing ending and shows a lot of promise coming from Stephen Turselli.

Zachary is a young teenage boy with a black eye and something to say. But since his father makes him feel as if he doesn’t have a voice, he spends most days alone in his uncle’s pickup, listens to a grunge tape, and lets the music speak for him. Woodshed, directed by Travis Newton, effortlessly crafts the portrait of a downtrodden and unheard boy who, for once in his life, feels heard. He finds both a father figure and open ears in his uncle, Jacob — a fun loving, irresponsible, and charismatic everyman. There’s a natural breath of fresh air that comes from a story that feels unburdened by plot. It’s a slice of life. Maybe not your life or my life, but it’s somebody’s. It isn’t the kind of movie where the main character has a revelation or comes to terms with some great truth. It’s the kind of film that contemplates with you. It lives with you at its own delicate pace, and then throws you back into the world. It’s the kind of story where a grunge band can seemingly have no other lyric than “I’ve got something to say!” and, instead of derailing the narrative, only add to its sincerity. Woodshed is a delightful and heartfelt film that keeps it succinct. It’s hard not to appreciate how earnest it all is. 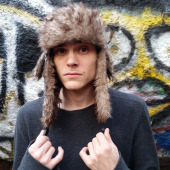 Ryan writes things. He can usually be found in Riverside, California watching scary movies in the dark or sobbing over his record collection. He is a slave to his cats and professional sad sack. If he grew a beard, he would look like a kid in disguise.

Tampopo is a Food Lover’s Paradise

Tallulah Is A Sundance Movie