Alien: Covenant continues the brave legacy of Prometheus. It refuses to regurgitate the conventions its franchise established, relying instead on the android to deliver its moments of horror. By focusing on David the android, Covenant becomes a part of the Romantic literary tradition of pushing against the boundaries of our understanding, twisting and permeating the boundaries between life and death (I wrote about this here). Like the quintessential Romantic novel Frankenstein, Alien: Covenant centers its characters around a search for an answer to our deepest existential questions: is there a meaning to life? Can our existence be explained entirely by our environments? Do we have responsibility for beings that we might create ourselves?
Yet unlike Frankenstein, Ridley Scott’s new Alien film explores the horror of nihilism – what if those questions have no answers? What if, as Peter Weyland discovers in Prometheus, there is simply nothing?
In the video below Alien: Covenant is explored in the context established by Romantic literature – the poems of Wordsworth, Coleridge, and Shelley, along with Frankenstein, are used to show how David (as Frankenstein, monster, and poet) develops the uniquely metaphysical horror of the android that has become a part of the cinematic canon.
Featured Image: 20th Century Fox
YouTube Channel: Cinema Sophistry 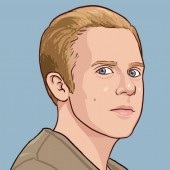 Zac Fanni is a Toronto-based freelance writer and college professor teaching in the Humanities. He is convinced of two things: that Penny Dreadful is the best television show to have ever aired, and that he will one day get a tenured position at Xavier's School for Gifted Youngsters. Both of these things are probably unlikely.